You are not alone

That’s the word people use to describe Monica. When it comes to people like her, she says,

‘We don’t have a limit; we have an obstacle that we just need to get past’.

This can-do attitude has helped 46-year-old Monica throughout her life, especially when it comes to her battle with the rare disease, Periodic Paralysis.

As soon as I began talking with her, she and I instantly connected. I could tell she was someone who doesn’t hold back, who tells it like it is. â€‹Periodic Paralysis is not who she is. It doesn’t define her. But unfortunately, it’s a big part of her life. So she knows the first step to winning the battle is to believe in herself.

The Path To Discovering Periodic Paralysis

Monica never really knew what it was like to be “normal.” Ever since she was a child, she has experienced discomfort and pain that most other people haven’t understood — including doctors. All of it was caused by Periodic Paralysis, but for the longest time, no one knew that.

As a child, she often felt intense pain when she ate, and when she went to the bathroom. When she went to the doctor, she was told that her digestive system squeezed the food through her body in an unusually fast way. The doctor had never seen anything like it. In high school, she started having trouble walking.

She didn’t know why it was happening, and the emotional stress even had an effect on her dreams. She had many dreams about suddenly not being able to walk or run, and not being able to move. Her doctor gave her crutches and said that her problems were just a case of teenage growing pains.

To make things worse, Monica also suffered from terrible migraines. Despite these health problems, she tried her best to live her life. She pursued her interest in riding horses — which also meant doing the hard work of caring for the horses and cleaning up after them. Even though doing this physically demanding work was hard on her, she tried her best to do it anyway, because that’s what she genuinely had a passion for.

The so-called “growing pains” didn’t stop as she entered adulthood. Monica began to have episodes of severe fatigue.

When she went to the doctor, she was diagnosed with Chronic Fatigue Syndrome.

The fatigue was still there, too — she was sometimes so fatigued that she had to walk around carrying a plastic lawn chair because she could only walk a short distance before needing somewhere to sit.

She made an appointment with a rheumatologist as her symptoms worsened. With her mom’s help, she used a wheelchair to get around the doctor’s office because she was unable to walk.

Monica was shocked by what happened next.

No One Believes Me

The nurse told her to get up and walk. She ignored the fact that Monica was clearly weak and in pain. To the nurse, Monica was just faking it, being overly dramatic.

“She thought — without even hearing my symptoms or anything — she’d already decided I’m faking it.”

At that moment, Monica realized that just because someone is a doctor or nurse doesn’t mean they’re an advocate for you.

She learned that lesson again later that day. After her rheumatologist told her that she needed to go to the Mayo Clinic right away, she called her primary care doctor to see if he agreed. But he didn’t share her concern, and he thought she was exaggerating. He didn’t see a reason for her to go to Mayo.

“He’s lecturing me, blaming me, that you brought this on yourself.”

He suggested she go to her local emergency room instead.

Faced with a mysterious, debilitating disease that didn’t make any sense and doctors who didn’t want to believe her experience was real, Monica didn’t know what to do except go to the emergency room and hope that things would work out.

However, the emergency room doctors weren’t quite sure what to make of the situation. They first guessed it was meningitis, then they thought it was a stroke. The next thing she knew, she was on her way to the Mayo Clinic, desperately wishing that this would finally be the point when things turned around.

Monica doesn’t place blame on the many doctors who misdiagnosed her. She knows her condition is so rare that most doctors don’t know anything about it. But who does she blame? “It’s the ones who dismissed me, the ones who never even gave me a chance.” She brings up the point that this happens disproportionately to female patients. Women who suffer from physical illnesses are often told that their problem is all in their head, not something that’s really happening in their bodies. The sexist stereotype of the overly emotional, hysterical woman is still alive and well today, sadly.

This sexist dismissal of Monica’s symptoms happened again when she visited the Mayo Clinic. As she tried to explain to her doctor all the chaos going on in her body, she laughed. She was used to doctors being dismissive of her suffering, so this time, she tried to put on a brave face and laugh. It backfired. The doctor assumed that her mood was too cheerful for her to have any real physical problem.

Monica referred to the doctor’s preconceived notions as a “box.”

The Mayo doctor gave Monica some medication meant to treat mental illness, not a physical illness. Naturally, it didn’t help her. She was at a point where it felt like she was almost out of options.

She told me that she felt “defeated, deflated, miserable.”

With a little bit of hope left, she went to see an immunologist, and the immunologist suspected she had Multiple Sclerosis. She was referred to Dr. Rosenberg, a Multiple Sclerosis specialist. When he told her that her problem was physical, not mental, she finally felt like she had an advocate in her corner. He sent her to Shands Hospital, where she was — after many years of suffering, confusion, and mystery — given the Periodic Paralysis diagnosis.

There Is Reason For Hope

Today, Monica looks back on her life and sees everything so much more clearly now. She told me that she felt like most doctors tried to put her into a “box” of what they thought her symptoms were supposed to look like. A lot of doctors were rude and dismissive. She remembers one emergency room doctor who told her that trying to figure out her condition was “above my pay grade.”

Even though she has faced numerous setbacks, she never lost her passionate personality throughout all these years. She never stopped being her own advocate, and she never gave up on finding others who would advocate for her. She switched to Advent Health from another large Orlando hospital, because the other hospital was dismissive of her problems, even when she suffered frightening symptoms such as her arm swelling up and turning blue.

Monica is very thankful to be a member of the Periodic Paralysis Association member, as she has been for ten years. She feels strongly supported by them — a huge contrast to doctors who didn’t take her seriously. One doctor, Dr. Cannon, is working hard to research this disease.

What is Monica’s advice to others who have Periodic Paralysis, or think they might have it?

“Be honest with the doctor. Be your best advocate for yourself. And do not take ownership if you are treated badly [by dismissive doctors].”

If you are struggling, know that there are many reasons to have hope. Monica has seen tremendous amounts of progress made in the fight against Periodic Paralysis over the past ten years. Treatments are better today than in the past, and more and more doctors are learning what the disease is.

Monica’s story is one of inner strength.  She always knew that her experience was real, not fake, and she never stopped fighting to let her voice be heard.

“I’m strong enough in knowing it’s not in my head. It’s not a psychogenic thing.”

Do you feel the way Monica does?

Do you fight every day to find the strength to continue on?

No matter what, don’t lose hope. You are not alone. We are here to help. We’ll be sharing more of Monica’s story as she continues to discover more on her journey with Periodic Paralysis.


If you enjoy this story, get ready for more, and share your story with us!  We’re featuring your #Unselfie stories for #GivingTuesday. Learn more here.

But first, check out 5 more #factsthatgiveback for GivingTuesday. Share this post with someone you know who wants to learn more about PP. And remember, you’re not alone.

Here’s our third round of #FactsThatGiveBack. 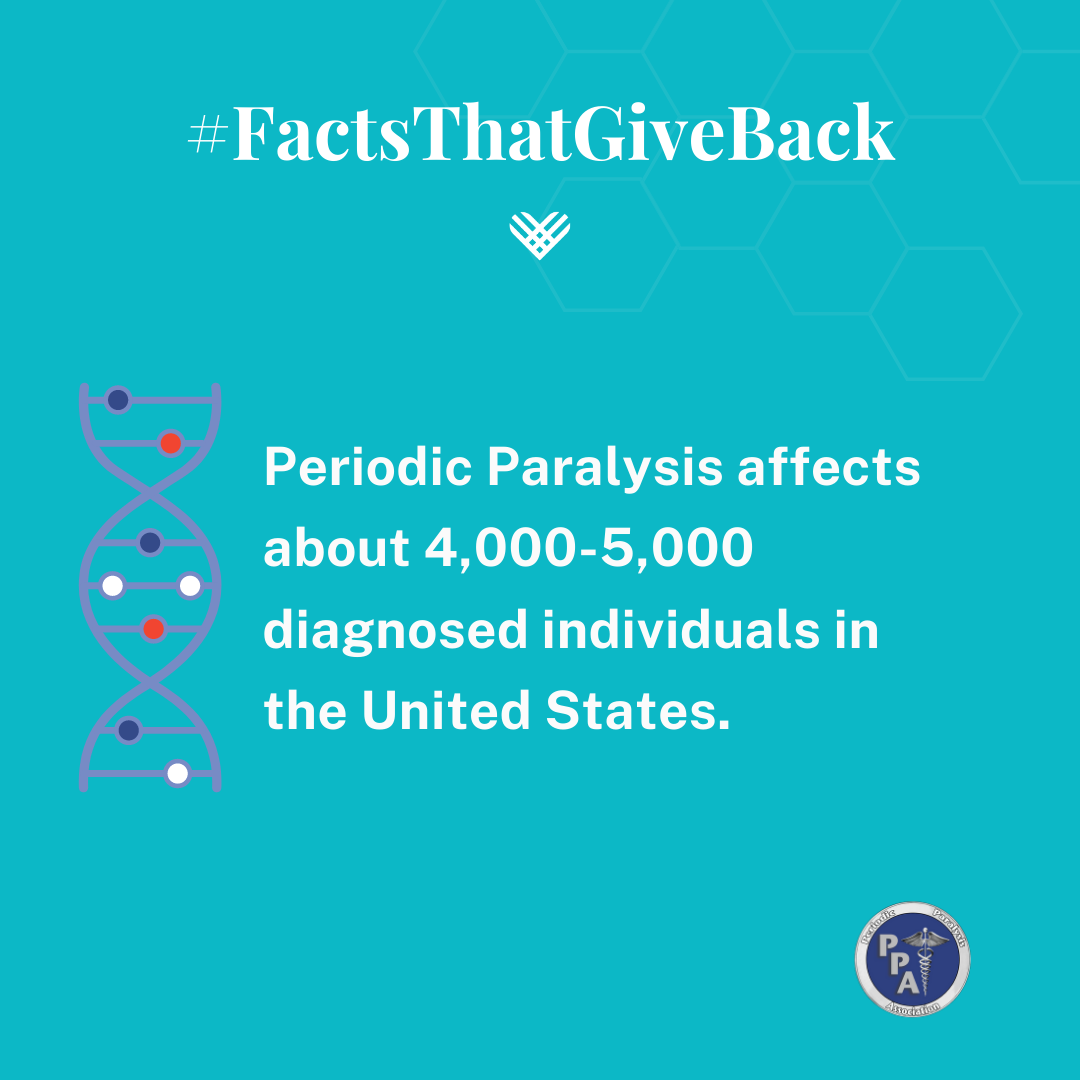 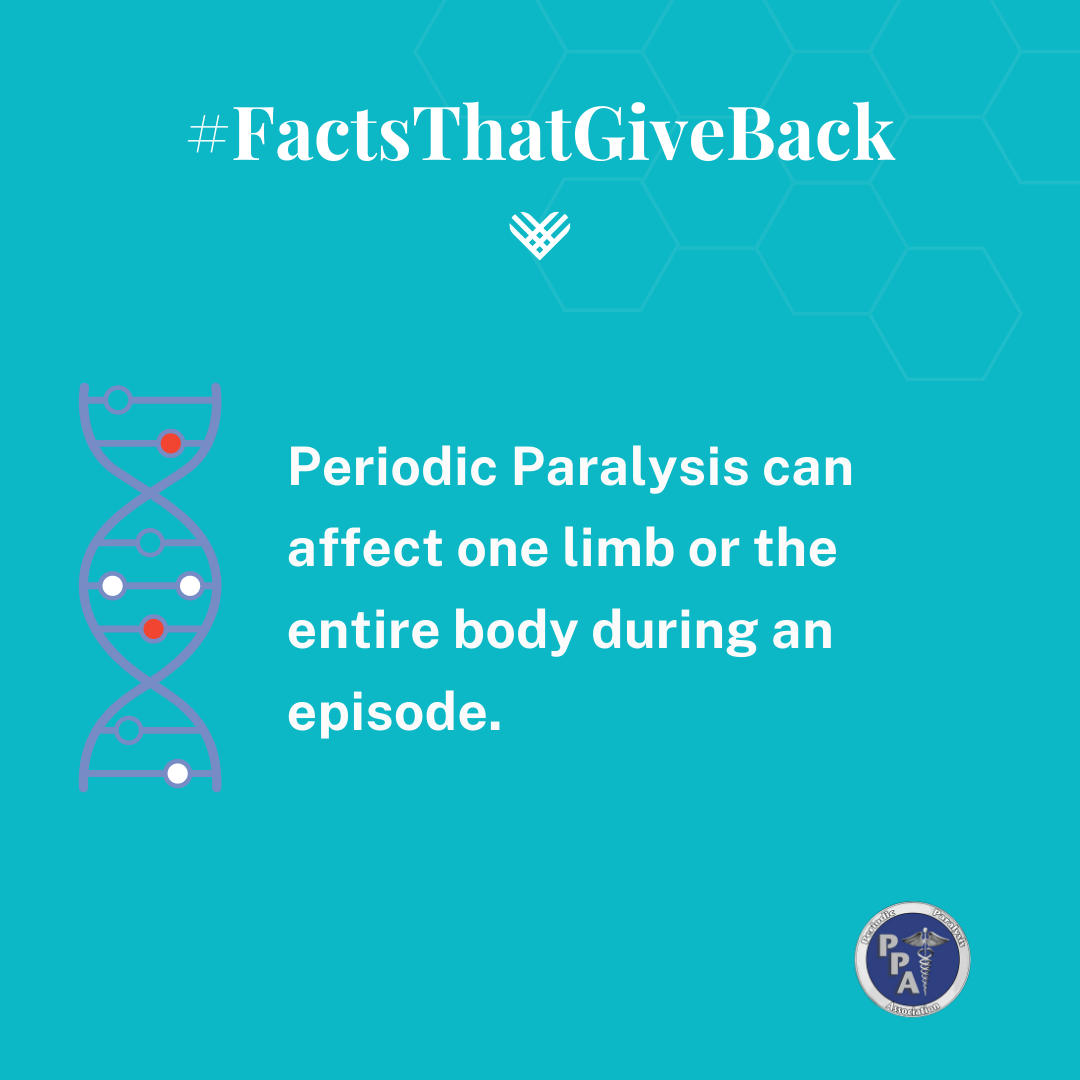 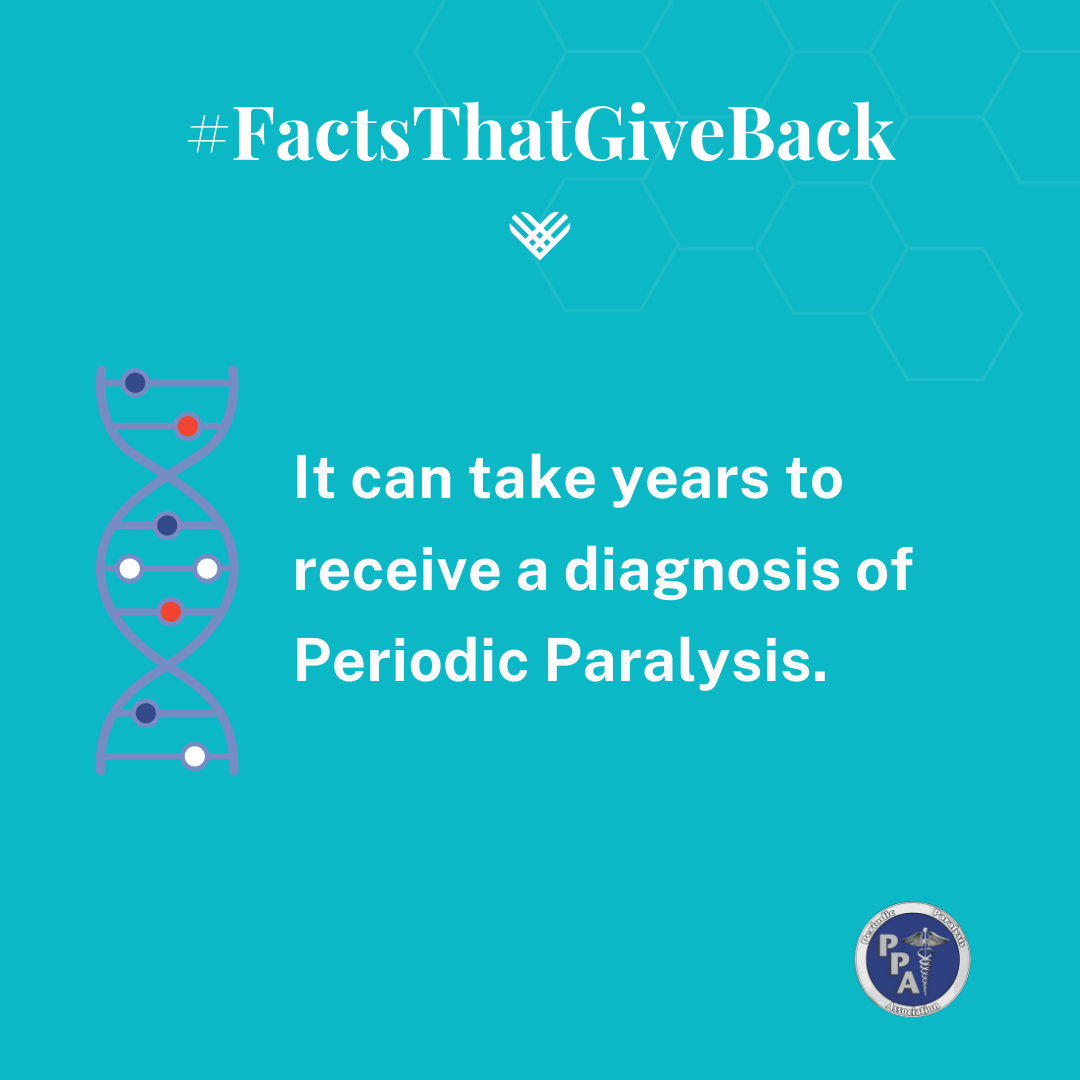 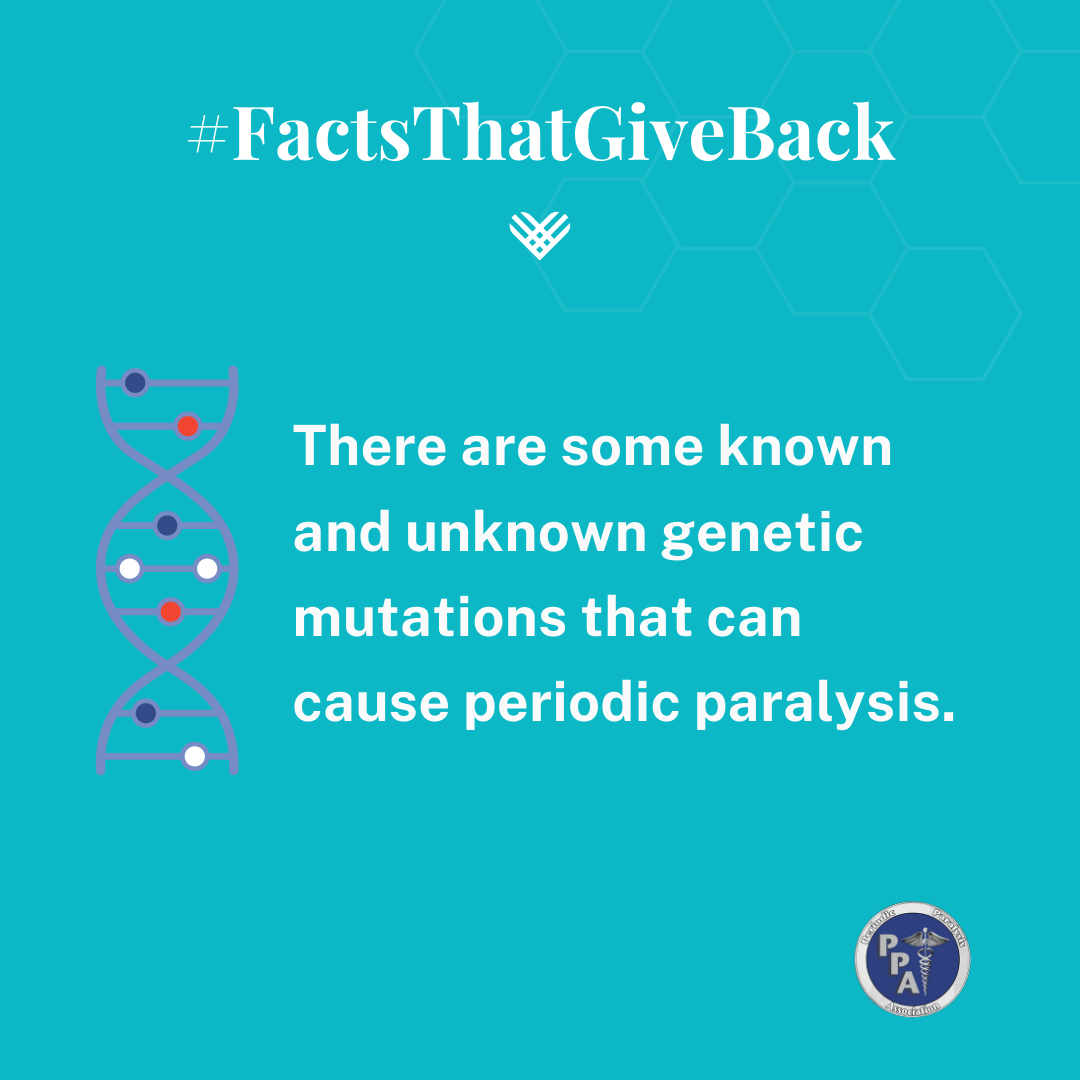 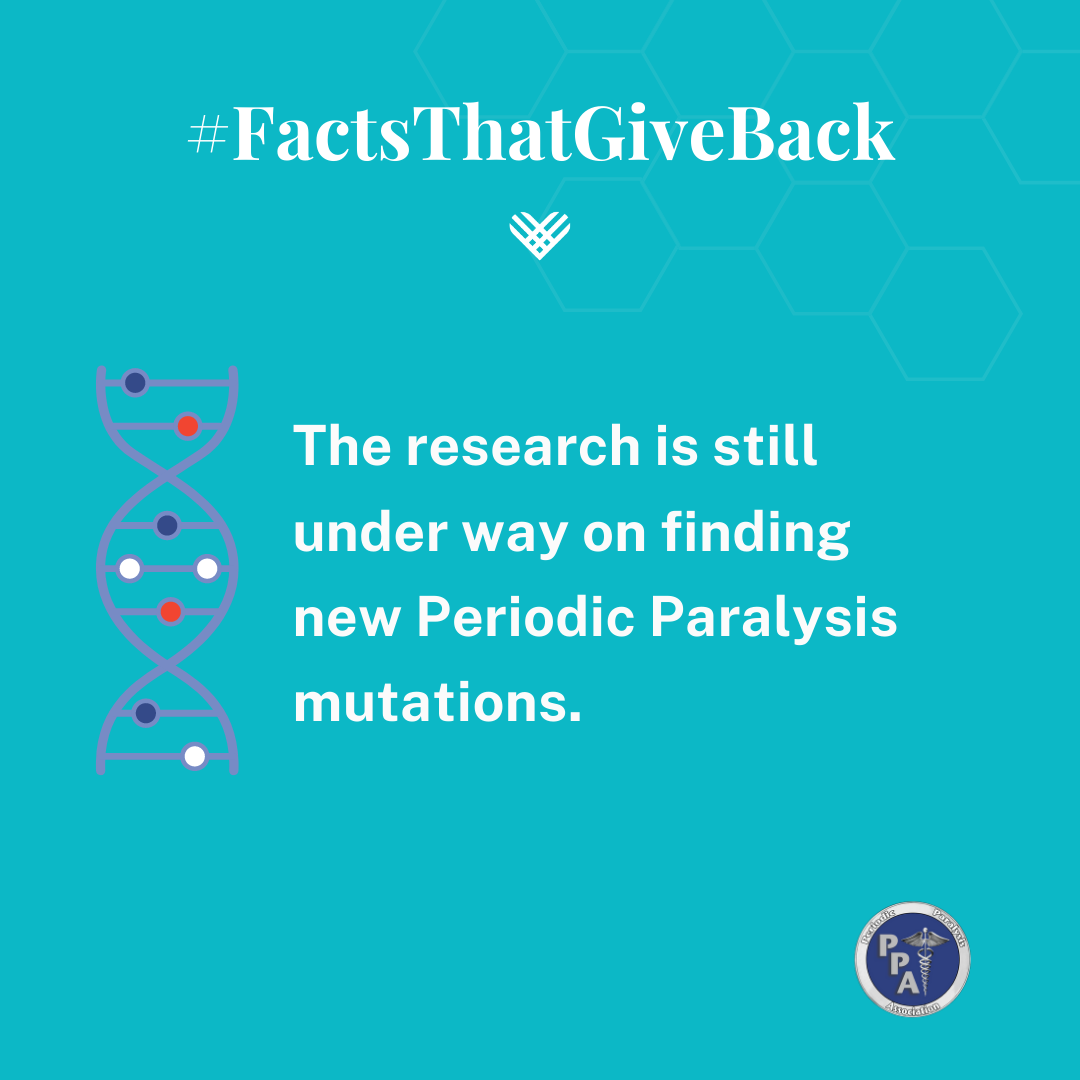 We encourage you to save and share our facts. Spread the word and ask your friends and family to join you in creating a real impact on December 1 by sharing what our mission means to you and why you support our organization. Make sure to use hashtag #GivingTuesday and tag us on social media so we can share too!

This site uses cookies. By continuing to use this site you agree to our use of cookies.ContinueRead more